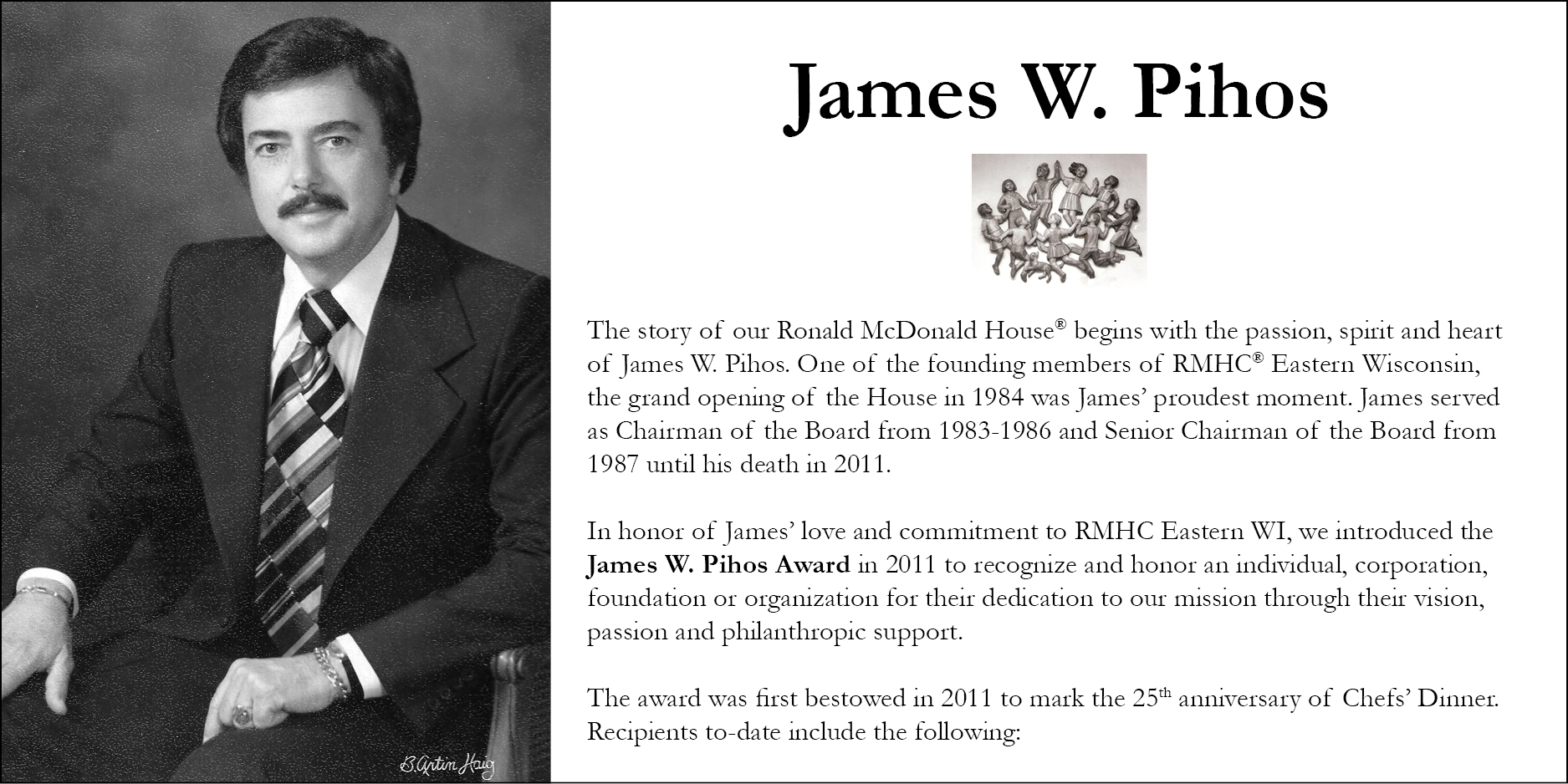 The Fotsch Family Foundation, a Waukesha County-based private foundation, distributes nearly $2 million in grants each year, supporting Catholic and educational causes, as well as social services throughout the Milwaukee and Waukesha communities.

Geri “Nana” Fotsch and her late husband, Bill, have embodied the Fotsch family motto, “To whom much is given, much is expected,” giving generously to causes they believe in. Over the years, they have instilled this belief in their eight children, 31 grandchildren and 19 great-grandchildren.

The Fotsch Family Foundation generously supports our families with gifts of time, talent and treasure. The Fotsch’s love for RMHC® doesn’t stop with Nana. She has engaged family and friends who now support our mission to keep families together and promote the health and well-being of children. Their commitment to our mission is deeply rooted in their faith and belief that at the end of the day, the most important thing is family.

We were thrilled to present the Ladish Co. Foundation with the 2021 James W. Pihos Award. This foundation has supported our House for over 25 years! Watch the video below to hear from our President/CEO Ann Petrie, and Chairman of the Board, Todd Jones, as they presented the award to Ladish Co. Foundation Trustees Wayne Larsen and Gary Vroman.

Kohl’s has been a leader in the Milwaukee community for more than 50 years. Since 2014, Kohl’s has supported RMHC® Eastern Wisconsin’s mission to keep families together and promote the health and well-being of children.

Their generosity goes beyond their financial support of more than $575,000; it also includes thousands of volunteer hours and in-kind donations. Funding support from Kohl’s has enhanced our guest families’ experiences in so many ways. Thanks to grant funding from Kohl’s, guest families enjoy engaging art, theatre and music programming several times each month with community partners like Kohl’s Wild Theater and RMHC Visiting Artists programs. Additionally, our Creative Arts Therapies program provides Art and Music Therapy to our guest families on a weekly basis. In 2019, there were 1,625 participants in Creative Arts Therapies, providing creative ways for our families to heal and process their feelings.

The Secret Garden, a favorite place for the families who call the Ronald McDonald House® home, has also been enhanced thanks to generous support from Kohl’s. For the past two years, our Happy Wheels Hospitality Cart program has rolled through the halls of Children’s Wisconsin, providing snacks, thoughtful toys, books and other surprises to keep families busy throughout their hospital stay. Kohl’s also provides event sponsorship and unique auction donations each year.

For over 17 years, Ann Phillips nurtured the Secret Garden and the families who call our Ronald McDonald House home. In 2002, Ann, a University of Wisconsin Extension Certiﬁed Master Gardener, helped organize our ﬁrst group of volunteer gardeners. She led a team of 22 Master Gardeners as they care for the Secret Garden and create environments that attract and protect area wildlife. Ann’s passion and dedication helped create a private and safe respite for our children, their families and the volunteers and staﬀ– in every season.

Northwestern Mutual dreams big and strives to improve the lives of children and families and make a lasting impact in the communities they serve. Together with their partners, they are improving education; revitalizing neighborhoods; enhancing Milwaukee by ensuring it is an inviting and exciting place to live, work and play; and accelerating the search for cures for childhood cancer.

In 2013, Northwestern Mutual Foundation embraced the idea of supporting a program that would touch each of our families – food – and partnered with us to launch the Healthy Food Program.  This program has enhanced the impact we have on each family who calls our House “home”. Families have access to fresh fruit, lunches to take with them to the hospital, and on Fridays when we have no family dinner, NM employees prepare “make ahead” meals for our families to enjoy.

Denny has been involved since the beginning, serving as one of the House’s founding members. Both Denny and his wife Jean’s dedication evolved from their personal loss and the desire to help others.

At the age of 2 ½, Denny and Jean’s daughter, Amy, tragically lost her battle to cancer. She had suffered from neuroblastoma for two years. During Amy’s illness, Jean found herself spending the entire day at Children’s Hospital, then rushing home to freshen up and eat, only to return to the hospital. She recalls “having no place to talk to other parents who also had seriously ill children. There wasn’t a place to take a shower, a nap or unwind with a cup of coffee.” Jean also recognized that parents from out of town did not have an inexpensive place to stay overnight. As a result, Denny and Jean founded Living One Day At A Time (LODAT), a local parent support group for those who have children with cancer, in December 1975.

In 1978, McDonald’s Co-Op of Southeastern Wisconsin approached LODAT and asked if they were interested in supporting the building of a Ronald McDonald House in Milwaukee. LODAT immediately accepted the proposition and Denny, then president of LODAT, began the tireless work to make a dream come true. The House opened in 1984 after a few years of fundraising and a year of construction. For the first two years, Denny served as the President on the Board of Directors and today, still remains an active Board Member.

Bob Monday is a man who embodies the phrase “Pay It Forward.”  His involvement with the House has been multifaceted and started with co-chairing three successful Black Tie Galas and organizing the Sarah Stride Run in honor of his friend’s daughter, Sarah Hegarty, who had passed away from cancer. He also organized a Gallery Night at the House, which raised awareness and funds for our mission and featured the photography and artistry of Donna Strong.

After spending 55 years, first as an employee, then as an owner/operator in the McDonald’s system, David Rause has lived the mission of giving back; his long association with Ronald McDonald House Charities Eastern Wisconsin is but one chapter in his life of sharing. Dave began working at McDonald’s in 1973 where his father Walter had been store owner/operator since 1959.  This store, located on Military Road in Fond du Lac, was the 100th McDonald’s store in the entire system.

Dave transitioned to owner of this store in the early 1970’s where his passion and motivation continued. Dave’s relentless quest for excellence, caring for his employees that goes beyond lip service and his love of the McDonald’s brand have all contributed to Dave’s success and eventually owning seventeen stores. His son Dave W. continued down the family path and after working at his father’s stores during high school and college, Dave W. is now, himself, an owner/operator.

After joining the RMHC Board of Directors in 1987, Dave has used his network of friends in the Fox Valley business community to share the message of the House. Additionally, Dave has sponsored the Valley Management Golf Outing benefiting RMHC.