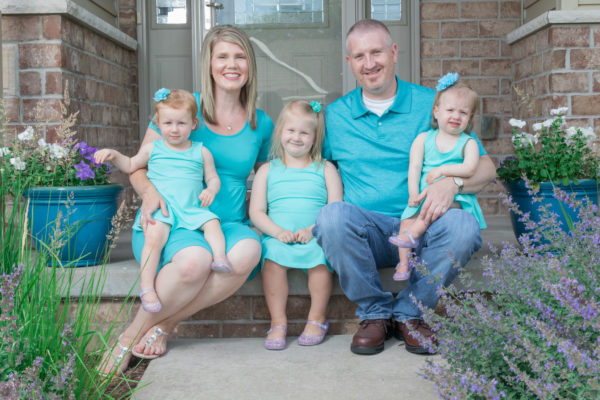 With 37 weeks considered a term pregnancy for twins, Kristyn Allen was ready to welcome her daughters into the world at 38 weeks. Braelyn and Brielle joined mom, dad Greg, and big sister Bailey on December 21, 2018. Kristyn had an easy delivery and both twins seemed healthy. Braelyn, “Twin A,” weighed seven pounds, three ounces and Brielle weighed five pounds, ten ounces.

Every baby is different, but it wasn’t long before Kristyn noticed little things about Braelyn. Her breathing seemed a bit unusual. She seemed to take a long time to drink a bottle and never drank as much as Brielle did.

At about three weeks old, Braelyn became very ill. Her pediatrician discovered a heart murmur. Braelyn was referred to a pediatric cardiologist and was diagnosed with a ventricular septal defect (VSD) – a small hole in the wall that separates the two pumping chambers of her heart. Her blood oxygen level was also very low. She was diagnosed with Coronavirus and hospitalized in Green Bay for 10 days.

Two weeks later, Braelyn was struck with respiratory syncytial virus (RSV), a very contagious virus that infects the respiratory tract that causes cold-like symptoms in adults and healthy children, but can cause serious problems in babies. Kristyn took Braelyn to the emergency room, where she was immediately admitted and quickly put on a ventilator. The following night, Kristyn brought Brielle in with the same symptoms.

Braelyn’s condition worsened – likely because the hole in her heart deterred circulation – and the maximum settings on her ventilator were not enough to oxygenate her blood. Her medical team recommended that she be transported to Children’s Wisconsin (CW) for extracorporeal membrane oxygenation (ECMO), a treatment that pumps blood outside of the body to a heart-lung machine and removes carbon dioxide before rewarming it and sending it back to the body. ECMO is very specialized and requires 24/7 monitoring by specialized nurses. Not everyone is a good candidate and with high potential for complications, there is a 50/50 chance of survival for babies.

Braelyn needed to make the 120-mile journey from Green Bay to Milwaukee, with Kristyn following close behind. The critical care fellow overseeing the CW transport told Kristyn that surviving the trip would be the hardest thing Braelyn would do that day. Kristyn describes the two-hour drive as an out of body experience. Each time she saw brake lights flash her heart stopped, as she assumed the worst.

Greg was informed by a hospital social worker in Green Bay that she would make arrangements for Kristyn to stay at our Ronald McDonald House®. A room was available and a few hours after arriving at CW, Braelyn’s condition was stable enough for Kristyn to make her way over to the House.

Having no idea what to expect, Kristyn was amazed by the “clean, modern and pretty” home she walked into. From the Welcome Bag on her bed to the House programs that meant she did not need to worry about where or what she would eat, Kristyn was embraced by the compassionate care of the people that make our Ronald McDonald House a home.

About three days into Braelyn’s ECMO treatment, while crossing the skywalk from RMHC® to CW, Kristyn received a phone call – the specialists had discovered a bleed in Braelyn’s brain. She instantly wondered whether this was the end. What would Braelyn’s quality of life become? And the most difficult question of all: would they need to remove her from life support?

The first person to join Kristyn at the hospital was her dad. They waited in silence as the doctors ran tests. He was there when the neurosurgeon reported that it appeared that Braelyn would recover with minimal, if any, repercussions.

Shortly after Braelyn’s transport to CW, Brielle joined her twin sister, not because she required elevated treatment, but to provide ease of care to the family. Braelyn received ECMO treatment for 13 days and ventilator support for six weeks. When Brielle was released from CW, the family was moved to a long term room with enough space to care for the entire family.

Greg recalls the medical journey as hectic, rewarding and saddening, all rolled into one. It was hectic to keep up with Bailey, tend to Brielle and fulfill his duties as a freelance sports journalist during a particularly active time of year. It was rewarding, though, to be able to provide for the girls and keep Bailey’s mind off of what Braelyn was facing while Mom was away. It was saddening to not be by Braelyn and Kristyn’s side to offer love and support. “I know it was a difficult time for Kristyn to be with Braelyn, but our little girl was in great hands with Kristyn and the Children’s staff,” says Greg.

Kristyn and her family spent 65 nights at our House. Today, Braelyn is making great strides – to see her interacting with twin, Brielle, and older sister, Bailey – she has demonstrated little delay in fine and growth motor skills. As far as her neurosurgeons and neurologists can tell, it’s not expected that her brain bleed will have a major impact on her health. In March, Braelyn underwent a successful surgery to repair the hole in her heart. The family is hopeful that this is one of the final steps in Braelyn’s medical journey.