Visitor Guidelines and How You Can Help

Home / News / “Every day with our kids is a gift:” The Martin Family Story 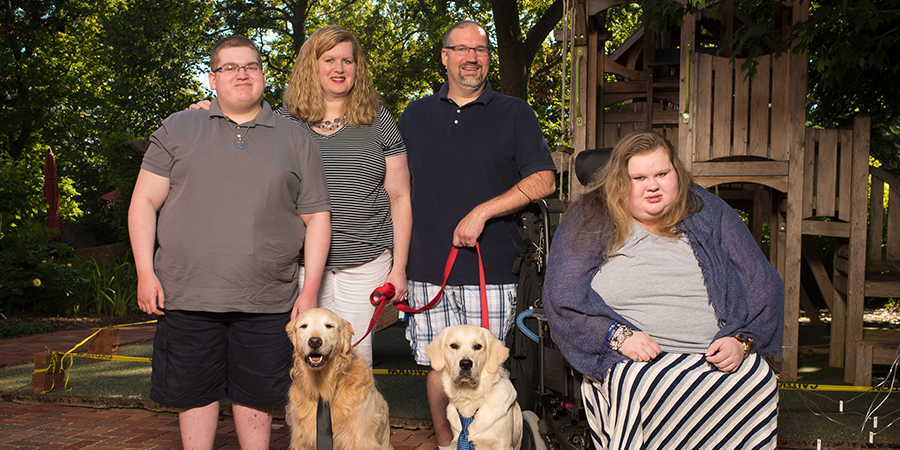 “Every day with our kids is a gift:” The Martin Family Story

The Ronald McDonald House keeps the Martin family together through any challenge that comes their way.

Nathaniel was three, hospitalized again, in rough shape with no clear treatment plan. His parents, Tammy and Doug, were worried, worn down, and without direction. Then Tammy was approached by a friend with urgent encouragement: Don’t give up.

Looking back, pregnancy was not easy for the Martins. Their daughter, Madelaine, was born with the cord wrapped around her neck. Despite subsequent medical concerns, Doug and Tammy were simply grateful Madelaine survived. They weighed the risks of another pregnancy, but moved forward with the blessing of their medical team. When Tammy got pregnant, she knew something was wrong. At 37 weeks, after nearly 6 months bed rest, Nathaniel was born and required resuscitation. Again, the Martins were grateful to have their child alive. They hoped they could all recover from the birth trauma and move forward as a new family of four. But Nathaniel never bounced back.

Tammy and Doug describe Nathaniel’s issues as “Madelaine’s times ten.” It was exhausting and often felt hopeless when they couldn’t get in front of the medical concerns. But an unexpected connection brought Nathaniel’s records into the hands of a physician at Johns Hopkins. Tammy and Doug remember the exact day when a doctor they had never met diagnosed Nathaniel with mitochondrial disease.

Mitochondria are in every cell in the body, producing 90% of the energy needed to sustain life. When mitochondria fail, cells are injured and die, and then organ systems fail. Tammy likens mitochondrial disease to a power outage. When the power plant fails, the stove may not turn on. But calling an appliance repairman is useless – the stove isn’t broken; its source of power doesn’t work. With mitochondrial disease, the source of power for cells is the problem, and the damage done cannot be reversed, just slowed down.

It would take more time to recognize that Madelaine’s difficulties, long attributed to birth trauma, were also due to mitochondrial disease. The Martins found themselves staying at the Ronald McDonald House in Cleveland putting together a care team across many specialties. The outlook was grim: Nathaniel would be old if he lived to be ten.

Eventually, the Martins transferred care to Milwaukee. Before the expansion in 2014, RMHC Eastern Wisconsin was at capacity and was not an option. Soon, the family gave up trying to get a room. Then five years ago, Nathaniel was facing a difficult hospitalization and the family needed to stay close. The Martins have been regulars at the House ever since: “We go to this place that is amazing. The people driving by on Watertown Plank, in their routines, have no idea what is going on in this House on the hill. Because they don’t need it. But if you need it – all the things that are supplied by strangers who donate – it’s amazing. This is what you want to do in your life: you want to contribute something. That’s what we appreciate about being here – the hearts of so many people, the volunteers, the staff. It’s incredibly encouraging. And it makes our life easier.”

The Martins never hesitate to take advantage of every day. Both kids continue to surpass expectations, but as they get older and their disease progresses, it gets more complicated. Attending State Fair (a family favorite) means carefully planning transportation of wheelchairs, service animals, coolers of medication, fluids, and oxygen. But these challenges don’t stop the Martins – they have hope, they have each other, and they never give up.

“I would never imagine my kids would be 17 and 20,” shared Tammy. “We know we don’t have forever with our kids, so every day with them is a gift.”