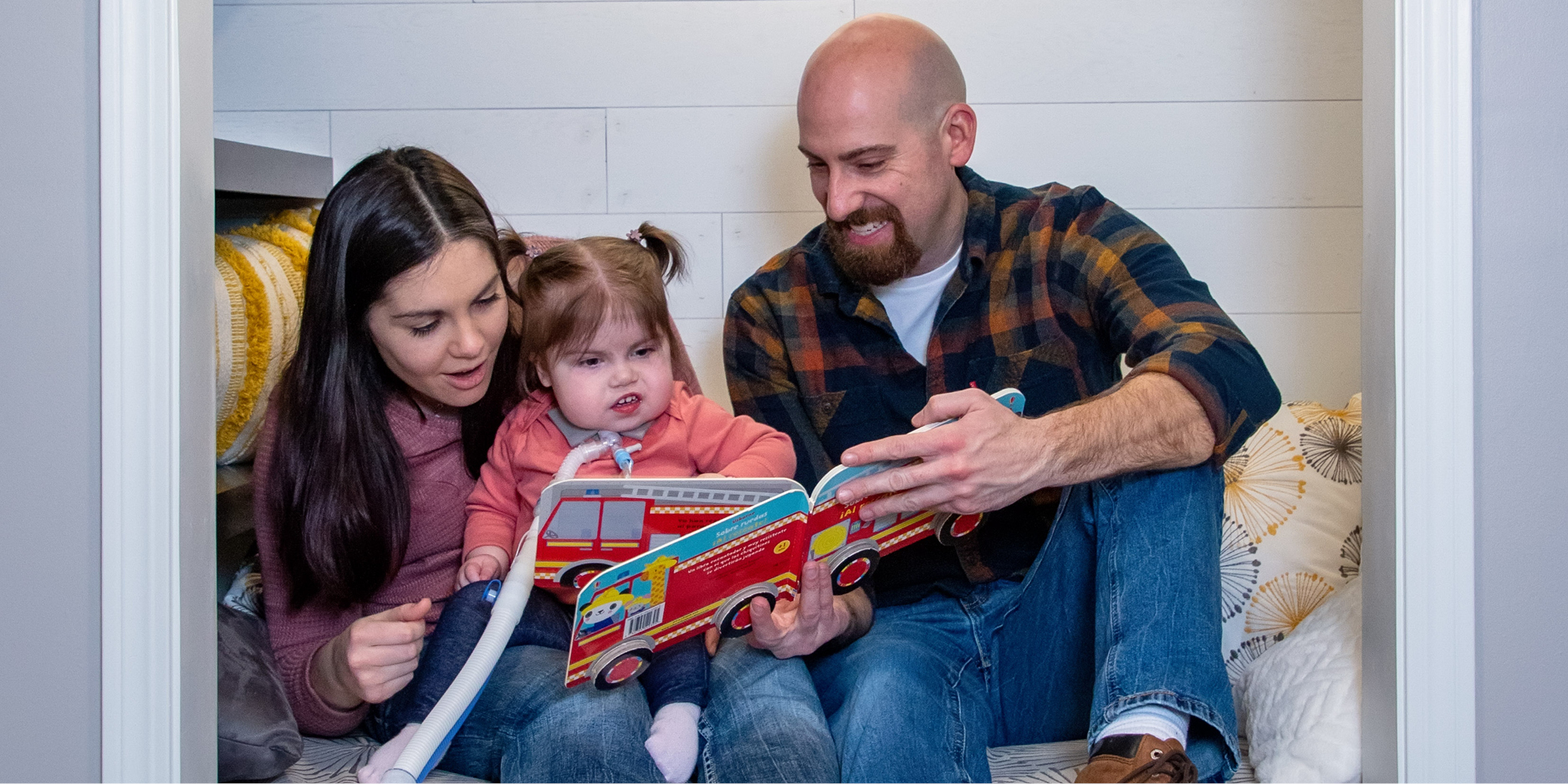 Before she was born, our daughter Elsie was diagnosed with a complex congenital heart defect known as Tetralogy of Fallot with Pulmonary Atresia and Major Aortopulmonary Collateral Arteries (MAPCAs). Elsie was born on December 14, 2020, at the Froedtert Birth Center and immediately transferred to the Neonatal Intensive Care Unit (NICU) at Children’s Wisconsin (CW). Although we knew of her heart defect, we were surprised by the level of respiratory distress she had from the moment she was born. Her difficulty breathing worsened and seven days into her NICU stay she was intubated and required help from a ventilator.

Genetic testing revealed that Elsie has a genetic condition known as 22q11.2 Deletion Syndrome, or DiGeorge Syndrome. A piece of Elsie’s 22nd chromosome was missing, which explained her heart defect and many of the complications that arose after her birth. Over the course of the next month, Elsie was diagnosed with tracheobronchomalacia or weak airways that would collapse without support from a ventilator. At just over one month old, Elsie had tracheostomy surgery in January of 2021. Despite the tracheostomy placement, Elsie had significant complications that prevented us from taking her home.

As Elsie’s condition became more complex, she was transferred in early April, 2021 to Lucile Packard Children’s Hospital (LPCH) at Stanford University in Palo Alto, California, where they specialized in repairing Elsie’s particular heart defect. Elsie’s heart surgery was a lengthy 18.5-hour procedure that was overall successful. Unfortunately, Elsie’s hospital stay continued to be a complicated and tumultuous one. Elsie was transported back to Wisconsin on May 21, 2021 and readmitted to the Pediatric ICU (PICU) at CW to continue her recovery. Elsie was finally well enough to be discharged on July 13, 2021 – the day before she turned seven months old.

The Ronald McDonald House® was an invaluable resource for us while our Elsie was in the NICU and again when we returned to Wisconsin and she continued to recover in the PICU. It was of utmost importance to us to spend every possible minute at the hospital with Elsie and RMHC® allowed us to do just that. During our stay, we found ourselves extra grateful for all the little things that you take for granted when you’re at home – access to a shower, a secure place to keep belongings, laundry machines, a refrigerator to keep food.

Those comforts were immensely helpful, but the peace of mind the House gave us was priceless. Elsie’s condition was so uncertain for so much of her hospitalization. Many nights at least one of us spent the night in Elsie’s hospital room. Yet on the nights where we both felt comfortable leaving her bedside, it was a relief to know that when problems arose, we could be at her side within a matter of minutes.

Life without the Ronald McDonald House would have been frustrating, exhausting and expensive. We would have spent months trying to sleep in hospital chairs or lying awake at home terrified that something might happen to Elsie while we were so many miles away. There isn’t one specific moment from the House that stands out. Instead, the lasting impact for us are the collective, day-to-day moments that brought us peace.