Home / News / “The House That Love Built®” by Felipe Millán

“The House That Love Built®” by Felipe Millán 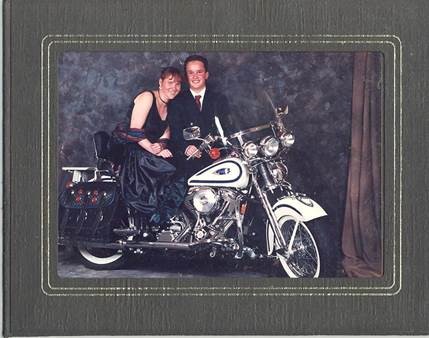 Felipe and his mother at a black-tie, biker-themed fundraising dinner for the House when he was fourteen.

We love hearing stories from former guests about their experiences at our Ronald McDonald House. No matter how long ago the stay might have been, it’s humbling to learn about the lasting impact our mission has on families. Recently, Felipe Millán shared a blog post about his time at our Ronald McDonald House over 30 years ago. Please enjoy the following excerpt from his post:

“I once asked my colleagues as part of a team-building exercise to name a place that had a role in shaping who they are today. I was fascinated by the answers – it was interesting to hear about the places that shaped people and why. For me, I can say the place that left the biggest mark on who I am today is Ronald McDonald House Charities® of Eastern Wisconsin.

I arrived at the Ronald McDonald House® with my mother on the night before my eighth birthday. The House, a red brick building on a hill in the city of Milwaukee, stood big and imposing in front of my little self. This was not exactly Plan A. When my parents first heard of bladder stimulation treatments through my mom’s friend Julie, Milwaukee was quite the stretch from our home in Chiapas, Mexico. The treatment, which uses electrical stimulation to strengthen the bladder muscles, improve control and minimize leaks, was still fairly new and experimental. One of the first programs that had a good reputation was located in Chicago was one of the first programs, so that’s where we headed initially. My mother had also chosen Chicago because she had cousins living there, who were willing to help with lodging and day-to-day transportation.

Chicago was also a hub for Continental Airlines, which through a program called CareForce set aside a limited number of free tickets for children requiring medical treatment, with an accompanying adult paying half-price. Unfortunately, a just a few weeks before we were scheduled to leave, the Food and Drug Administration shut down the Chicago program. My treatment plan was suddenly in doubt. After additional research and a flurry of long-distance phone calls from our rotary phone in Chiapas, my mother learned that St. Michael’s Hospital in Milwaukee also had a good bladder stimulation. Even though my mother’s knowledge of Milwaukee was in the context of bratwurst and beer, my parents decided we could give it a shot. St. Michael’s recommended we reach out to the Ronald McDonald House for accommodations. At the time, the House asked for a suggested donation of about $10 a night, which given the length of my treatments (my first set of treatments would run over six weeks and then two weeks every three months for a couple of years, then every six months, and then every year), seemed the only way we would have been able to afford the stay.

The House itself was a mix of sparsity and, for a kid, luxury. The carpeted bedrooms were small, containing a chest of drawers, two double beds and a desk. No bedroom had its own bathroom just yet. Instead, guests were assigned shared bathrooms located between rooms. In lieu of phones in the rooms, we had to use the coin-operated phones located on each of the three floors. For incoming calls, family members called the front desk and were transferred to one of a handful of receive-only phones on each floor. The Office Assistant would page, “Mrs. Millán, you have a phone call on Line Two,” which triggered a frantic scramble to make it to the phone before the family member hung up or the call was disconnected. Rooms had no microwaves or fridges – cooking was done in two large-ish kitchens, one on each floor. Guests could watch TV or movies in the TV rooms (one per floor), so like the bathrooms and phones, families had to delicately negotiate, navigate and adjust to shared entertainment spaces.

If the accommodations were considered basic, the play spaces seemed nearly fantastical to a kid like me. On the first floor, a large stuffed tiger and polar bear guarded the entrance to the playroom, which was full of blocks, toy cars, Legos, kitchen sets and board games. Outside, at the back of the House, a wonderful playground awaited as a fresh air activity. The arcade room provided a decent number of free arcade games, where you could play Double Dragon or Pacman. While TVs and VCRs were limited, the House had a decent video library and a good selection of Nintendo games. A library with children’s books and novels was also available.

On my actual birthday, my mother celebrated by baking brownies. Located in “America’s Dairyland,” the Ronald McDonald House received a daily donation of several gallons of milk, and families were free to use what they needed. My mother put up a sign on the announcement board encouraging other House guests to stop by that afternoon for a brownie and some milk in honor of my birthday. To my surprise, that afternoon a steady stream of people – complete strangers – stopped by to wish me a happy birthday. One guest brought her accordion and played “Happy Birthday.” A pile of zoo and museum gift shop presents were piled high on the table: plastic snakes and bugs, dinosaurs, books on fossils and small stuffed animals. I was so moved. Nobody knew me or had to bring me a present or sing, but they did. To this day, that birthday remains one of my most memorable.”

Thank you, Felipe, for sharing fond memories of your time at our Ronald McDonald House.