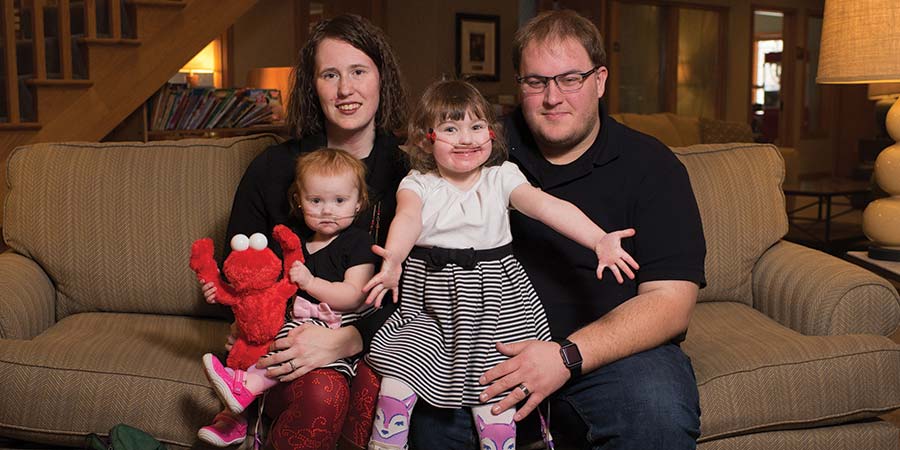 The Ronald McDonald House puts smiles on Jillian and Lydia’s faces as they go through treatment together.

Amanda and Brent Upton are parents to two medically complex kiddos, Jillian (age 6) and Lydia (age 2). After Jillian was born, she was vomiting profusely and could not gain weight. Since then, the doctors have not been able to determine exactly what’s wrong. When Lydia came along, so many things were the same, but Lydia also has her own puzzling complications. Even after all this time, both girls are considered undiagnosed, though an underlying muscle issue and genetic disorder are suspected. “Because we don’t have an overarching diagnosis, I describe it as playing whack-a-mole with symptoms,” shared Amanda. This means numerous outpatient appointments, which can often have a domino-effect – four days of planned appointments can quickly turn into an unexpected two weeks. An emergency hospital stay for either child is not unusual.

Staying at the Ronald McDonald House was not originally part of the Uptons’ plans. But after both girls had surgery on the same day, they knew something had to change. A friend who stayed at RMHC regularly encouraged them to try the House, and as Amanda recalled, that first experience was more than they expected:

“When we left after that first day, I honestly didn’t know when or if we would need to be back. Since then we have been back nearly monthly. We have become close friends with other families. I could see the value in everything that occurs in the House. I could especially see the value in the family meals. When Jillian was really little and we were living in the hospital, I remember our bank account being drained at the end of the week just from eating there.”

In that moment, the Uptons became aware of the many ways RMHC takes care of each family it serves. With every kind gesture that comes their way, Amanda looks to pay it forward, starting with the Family Meal Program:

“The family meals make a huge impact. It was one of those places I saw how important it was and how easily we could give back and care for others. It was how our community around us could help, too. Every time we’ve served family dinners, we’ve had different people join us. When we call on our support system, they are quick to say yes. We hit the point where there are literally too many cooks in the kitchen!”

Not only have the Uptons encouraged those around them to volunteer – they’ve ensured their girls understand the importance, too. Both Jillian & Lydia have feeding tubes; they do not eat any food by mouth. In the beginning, Amanda and Brent hoped that Jillian could be off the feeding tube by age one. When they learned that wasn’t realistic, they had to rethink: the feeding tube could be a burden or it could be a tool that allows their girls to be their best, keeping them growing, playing, and learning. Even though Jillian doesn’t eat, she’s still excited to know her family is taking care of others:

“Jillian is someone who really loves to give back. We’ll be shopping and she’ll see something and say, ‘This would make somebody smile at Ronald McDonald House!’

As a mom, encouraging that is huge. “I want my kids to want to give and be generous to others.” We like the way Jillian thinks!